The Nets and the Celtics will be playing over a best of seven series in the next few weeks in the Eastern Conference. The Brooklyn Net’s Kevin Durant was very determined to take in an early lead. However, he landed only 2 for 10 from the field. His teammates all missed their first 3 point attempts. Eventually, their efforts will pay off, as the Nets take the lead over the Celtics just after their second game in the quarterfinal.

Check your sportsbook pay per head lines for any changes in the NBA as the games will be more exciting, and you will be getting more action across less games since you are in the playoffs already. The Nets, led by Durant, James Harden, and Kyrie Irving eventually won 104-93. This brings the series to 2-0 favoring the Nets.

The Nets Take the Lead 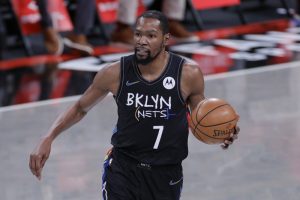 It was a bit of adjustment for the teams, as it is the first time they played in front of fans in a playoff game. It could be nerves. It could be a faulty offense. But Nets fans who were there to watch, sure had a grand time. 14,291 fans watched live. And now, they will be waiting to see if the Nets will be able to pull together another win in Game 3. Your sports betting software will be getting a lot of bets on this series as you have a chance for the Nets to get a 3rd win, making Game 4 a do-or-die situation for the Celtics.

The NBA will be having the playoffs over the next few weeks, and lines will be changing as soon as pre-game lines open, which makes it important for bookies to check their lines and be quick with movements as the weeks progress. Will the Nets cinch another win to get a 3-win streak? Will the Celtics be able to support Tatum and get in another win? Kemba Walker, Marcus Smart, and Tatum will have to do better. Make sure that you read through sportsbook reviews to find the best sportsbook software to help you earn money in the NBA playoffs.