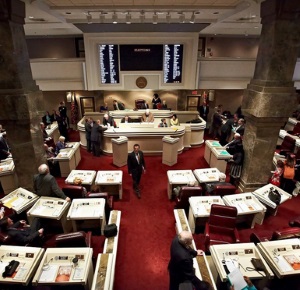 The legislature in Alabama has been busy this week as several bills have been moving through the floor and it includes Guns and Gambling. These bills have been addressing school safety, gambling, prisons and more in a race to get them thru before the end of the session.

According to the news, Rep. Allen Farley, of Jefferson and Shelby counties, introduced a bill last monthwhich would allow juvenile probation officers to share certain information with school personnel.  This is in order to give schools more safety and to increase the rehabilitation services that will be given to a child.

On Thursday, the HB452 bill sawa second reading in the House. This time, the bill has excluded the information that can be shared with a school. The information excluded are mental health and medical records. It also provide immunity for sharing and receiving the information with the understanding that the shared records are confidential.

Guns and Gambling Bill in Alabama

The bill also would amend current law about carrying a firearm on school property.

This bill is one of several reactions nationwide to the deadly school shooting at a Florida high school last month.

Farley also is sponsoring HB449, which he introduced Feb. 22. It would authorize the formation of “trained volunteer school emergency security forces” at public K-12 schools across the state.

HB447, sponsored by Rep. Terri Collins of Morgan County, passed out of committee Thursday. The bill would establish the Alabama Task Force on School Safety and Security, which would study educational and safety laws, rules and policies each year.